Still a force to Reckon with : Jaish-e-Mohammad

Jaish-e-Mohammad (JeM) is a semi-urban jihadist-sectarian organization, originally came into being during Islamist insurgency in Indian Kashmir (1989-2002). The JeM surfaced during the Kashmir insurgency by 2000. JeM was established by Masood Azhar, a graduate of Dar ul Uloom Islamia madrasah located at Binori Town, Karachi. Azhar joined Harkat ul Jihad ul Islami (HuJI) in 1983 and later climbed up to become the secretary general of Harkat ul Mujahedeen (HuM) after the HuM parted ways with HuJI in 1987.

Serious efforts were later taken to merge the two organizations (HuM and HuJI) along with few other Jihadi groups active in Indian Kashmir. Masood Azhar was instrumental in the merger of HuJI and HuM in 1994. Using his negotiation and communications skills, he managed to establish Harkat-ul-Ansar (HuA), a broader platform of jihadi violent non-state actors after merging together HuM and HuJI. The aim was to perform better in Kashmir insurgency by pooling sources and coordinating with each other. JeM did not get a long run in Kashmir insurgency since it was quite a late entrant to the field in 2000.[1]

Because of his obese physique (unfit for jihadi training), Azhar was never directly involved in physical fighting. Nonetheless, he remained actively involved in directing and planning acts of terrorism in Indian Kashmir insurgency. He disseminated the jihadi propaganda through his writings and statements.  While visiting India on a fake Portuguese passport, Azhar was arrested in 1994 by Indian security forces in Indian Kashmir; he was freed in exchange for passengers of hijacked Air India liner (Flight 814), along with Mushtaq Zargar and Ahmed Umar Saeed Shaikh, in 1999.[2]

Azhar parted ways with HuM after his release from Indian custody and laid the foundations of Jaish-e-Mohammad in late 2000. Initially, JeM drew most of its membership from the like-minded Deobandi jihadi groups such HuM, Sipah-e-Sihaba and its militant faction Lashkar-e-Jhangvi and HuJI. It is widely believed that JeM was created by elements of Islamist network in Pakistan and state security apparatus to increase competition amongst jihadi outfits.[3]

For many experts and analysts, Islamist violent non-state actors like JeM, LJ/SeS, HuM, and HuJI, with their urban nature and because of their non-Pashtun membership, could broadly be defined as Punjabi Taliban. These groups are based in Punjab and mostly operate in central and southern districts of Punjab province, with strong connections to tribal area Pashtun-Pakistani Taliban.[4] They are not Taliban (who are overwhelmingly Pashtuns) but try hard to emulate like them.

JeM is no ordinary Islamist violent non-state actor. Its Emir (chief) Masood Azhar has been involved in an array of jihadist activities. He is a prolific jihadist writer and published many books, a skilled negotiator and administrator. He began his career from Kashmir insurgency and later kept shifting jihadi organizations involving in Kashmir, Afghanistan, sectarian killings in Pakistan and finally getting involved in Global War on Terror by the side of Punjabi Taliban forces for aiding their Afghan and Pashtun kin.

After 9/11 attacks and beginning of GWOT, JeM came to prominence amongst jihadi circles. JeM had begun to side with Al-Qaeda and joined hands with Lashkar-e-Taiba (LeT) in launching terrorist attack at Indian parliament in December 2001. The purpose of attack was to ignite tensions between Pakistan and India for providing breathing space for besieged Al-Qaeda leaders in tribal areas of Pakistan.[5]  The said act of terrorism indeed paved the way for a 6-month long stand-off between armed forces of India and Pakistan. The hostilities led to the nuclear red alerts in both countries.

Another spectacular act of terrorism, keeping in view of same objective, was kidnapping and murder of Daniel Pearl, in January 2002. Ahmad Omar Saeed Shaikh, a key JeM and former member of HuM (one of the three released in exchange for airline passengers in 1999), kidnapped Wall Street Journal‘s Pakistan correspondent Daniel Pearl while he was on his way to interview Jamaat-ul-Fuqra’s chief, Mubrak Gillani, in Karachi.[6] The kidnapping operation was in collusion with Al-Qaeda. Khalid Shaikh Mohammad, the 9/11 attacks mastermind, confessed and accepted his central role alongside Omar Shaikh in kidnapping and beheading of Daniel Pearl.  Khalid Shaikh was arrested from Rawalpindi, Pakistan in 2003.[7]

Pearl was trying hard to expose links of US-based Jamaat-ul Fuqra with Pakistani Islamist militant organizations, and their links with Taliban and Al-Qaeda. He was abducted, tortured, beheaded and later his body was cut into pieces before being buried at an empty plot in the outskirts of Karachi[8].  According to Amir Mir, « Shaikh Ahmad Omar Saeed, convicted for Pearl’s murder, was actually a key operative of the Jaish-e-Mohammad (JeM) and a close confidant of its chief, Maulana Masood Azhar.« [9]

Initially, alike its sister concerns HuJI, HuM, and LJ, the JeM appeared to be Kashmir centric, but after the commencement of GWOT started subscribing to pan-Islamist ideologies. Its cadres comprise of Punjabi-Pakistan, Kashmiris and some disillusioned expatriates Pakistanis. According to Nicholas Howenstein, « along with cannibalizing many of HuM’s resources, JeM has also received support through the camaraderie of Afghan war veterans (….), the Taliban and Osama Bin Laden, and several other Sunni groups in Pakistan gave Maulana Azhar seed money and other resources to establish JeM. The Al-Rashid Trust, an important charity organization once linked to Al-Qaeda and the Taliban, reportedly provided Rs. 20 million in seed money ».[10]

JeM’s heydays were over with 9/11 attacks and Pakistani military establishment’s U-turn. The shifting of Pakistani policies amid GWOT turned these groups against Pakistan and that also pushed them towards tribal area based Pashtun-Pakistan Taliban groups. Along with other jihadi groups JeM faced proscription by General Musharaff in 2002. JeM has started to splinter into various factions and becoming linked to Al-Qaeda Central in Pakistan in the backdrop of GWOT. 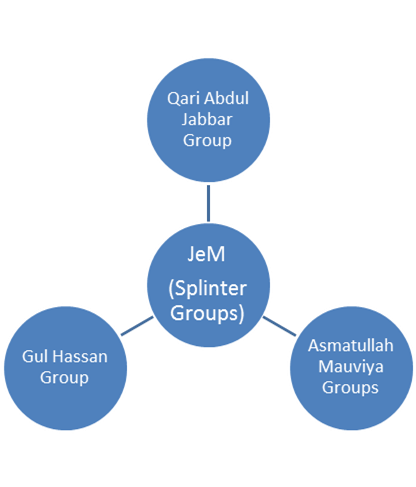 JeM, similar to its predecessors, splintered into several militant groups, mostly named after former high ranking JeM operatives, such as : Abdul Jabbar group, Gul Hassan group, and Asmatullah Muaviya group. JeM has been working with splinters of other jihadi groups amid GWOT in Pakistan and Pakistani government’s change of policies.

JeM developed its relationship with Al-Qaeda during Taliban period. JeM was formed with blessings from Deobandi scholar Mufti Nizamud Din Shamzai, head cleric of Binori Town Mosque/madressah (aka Dar ul Uloom Islamia Binori Town) at Karachi. Shamzai had longstanding ties with Al-Qaeda and Taliban. Shamzai also had played pivotal role in the formation of HuJI, HuM and LeJ, and many Taliban high command leaders studied at his seminary.[11] In fact, Shamzai used his influence over all Deoabndi-Wahabi outfits and Islamist parties to develop ties. Right after JeM’s formation in 2000 the Taliban allowed nascent organization’s rank and files to receive training at Al-Qaeda-run training camps in Afghanistan. JeM fostered close relations with Al-Qaeda from the beginning and with the commencement of GWOT reciprocated by launching attack at Indian Parliament on December 13, 2001.[12] The terrorist operation had resulted in an India-Pakistan military standoff, and provided a breathing space to Al-Qaeda leaders besieged in tribal areas by Pakistani security forces. Kidnapping and murder of Wall Street Journal‘s correspondent Daniel Pearl was an Al-Qaeda-JeM joint operation.[13] Khalid Shaikh Mohammad, chief planner of 9/11 attacks was part of the venture. Khalid Shaikh, after his arrest in 2003, from Rawalpindi revealed to his interrogators that he personally slit the throat of Pearl.[14]

JeM even after splintering into several factions does have a potential to strike back. Recently, Masood Azahar has resurfaced in Pakistani Kashmir. He led a rally of his followers in Mazafarabad, Pakistani Kashmir, no action was taken against him by the concerned authorities indicating that the government either has already cajoled him for not instigating violence against the state or he has returned to his old ‘India centric’ stances which would bother no one in Pakistan. Another surprising development was surrender of Asmatullah Mauviya faction of JeM to security forces. Asmatullah was considered as the leader of Punjabi Taliban allied with Tehreek-e-Taliban Pakistan (TTP) based in tribal areas of Pakistan and working closely with Al-Qaeda Core also based in tribal areas. The surrender of Mauviya and his forces is hailed by Pakistani policy makers and security forces as one great victory against the war against Taliban and TTP.